Molière and Lully, from Versailles to the Sublime Porte 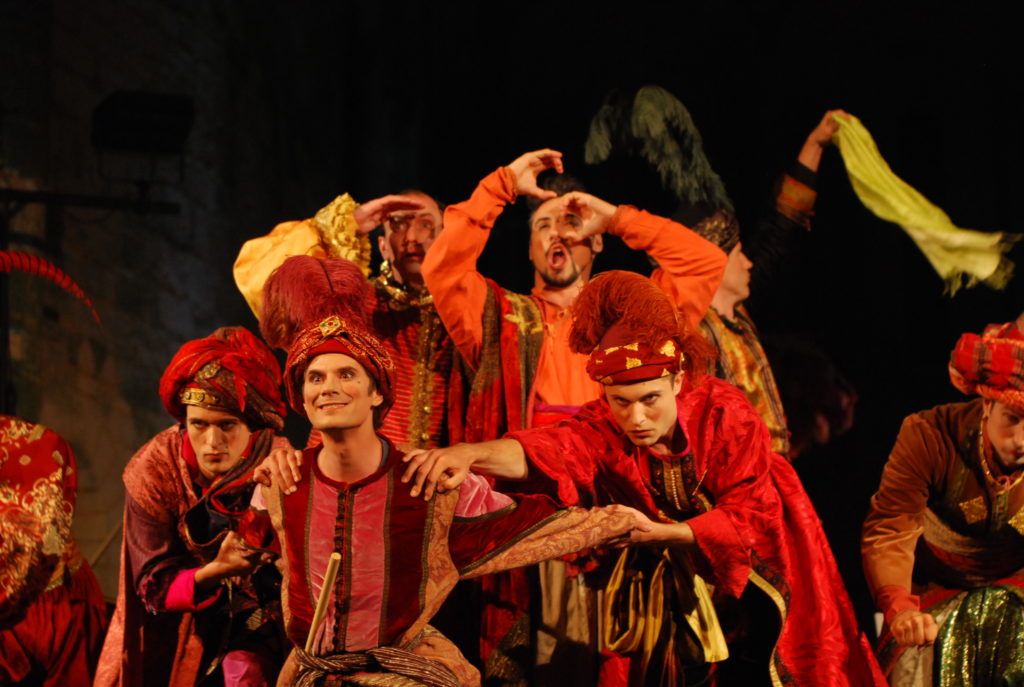 THE SPIRIT OF THE PROJECT

The aim of the Ancient Music Academy’s artistic project for the Festival of Perigord Noir 2014 is, above all, to present an original work based on Molière and Lully’s collaborative effort, Le Bourgeois Gentilhomme (“The Bourgeois Gentleman”), in which music will play a predominant role. It is not a question of producing yet another version of this play, as was done recently in Paris and on tour by extremely talented theater companies. Le Bourgeois Gentilhomme was first created at Chambord in 1670 and presented to King Louis XIV and the Royal Court.
The title of this show will thus not be Le Bourgeois Gentilhomme, but rather Mamamouchi or Molière et Lully à la rencontre de la Sublime Porte (“Molière and Lully, from Versailles to the Sublime Porte”). Mamamouchi is the rather far fetched title bestowed on the Parisian Bourgeois Gentilhomme, Monsieur Jourdain, by the so-called son of the Grand Turc who wants him to marry his daughter. The Mamamouchi scene is one of the best known works of the 17th century Baroque repertoire.
We hope to structure our work around two main themes:
-the richness and originality of Lully’s music,
-the encounter of two diametrically opposed worlds, France and the Ottoman Empire, with special focus on the “Turquerie” (the Orientalist fashion of the time imitating Turkish art and culture, and an integral part of this play).
Le Bourgeois Gentilhomme is a pivotal work in Jean-Baptiste Lully’s musical career, and served as a kind of matrix for much of his later creation. Not only does it represent his encounter with Molière and the height of their collaboration, but it also marks the birth of what will come to be known as “opéra à la française”.

Nothing is more representative of the esprit français than this play. That is why the text and the music still ring true to contemporary French audiences, and the character of Monsieur Jourdain is known well beyond France’s borders, even though some of its codes, the social context (the rise of a certain bourgeoisie with regards to the noble class) and the geopolitical concerns of the time (France’s relationship with the Mediterranean world, especially with the Ottoman Empire) have since been forgotten.
The unique nature of this play, with its “Turquerie”, shows the encounter, and the confrontation, of totally opposite worlds, with the Ottoman Empire being a universal concern in people’s minds at the time.

The project will allow us to highlight this historical aspect of the work and, in particular, the exchange between these two great countries. The language of the Turquerie, which seems whimsical today, was in fact a pidgin invented and used by sailors in Mediterranean ports: it thus “spoke” to many audience members at the time.
The focal point of these musings around Lully and Molière’s Le Bourgeois Gentilhomme will, of course, be the music. The show will last approximately two hours (with two parts) and present virtually all the music from Acts I, II and IV (the “Turquerie”). Acts III and V will be summarized by a storyteller whose prominent role will provide cohesion to the show as a whole.
An actor (the music master) will provide details of the baroque style of certain scenes. The first part (“Versailles”), will present Lully’s music for the theatre, through the eyes of Monsieur Jourdain. It will be made up of Act 1 and the beginning of Act 2 and focused on the Ballet Master and the Music Master. It will end with a re-visited “Ballet des Nations”, consisting of the most beautiful extracts from Lully’s “Tragédies en musique” and chosen particularly from among the prologues to his operas.
They will be presented to Monsieur Jourdain as being what is best at the Royal Court and will be performed during the entertainment at the end of the play.
During the “Turquerie”, the second part, traditional Turkish musicians will come on stage and be able to converse with the orchestra, play traditional tunes and perform Lully’s music with an oriental interpretation. The orchestra will be able to play in the French and also in the Turkish way. This part will be made up of the original “Turquerie” as well as other instrumental pieces composed by Lully.

THE FESTIVAL AND THE ANCIENT MUSIC ACADEMY OF PERIGORD NOIR

In August and September, every summer, the well-known Périgord Noir Festival, in the Dordogne region of France, proposes a vast selection of classical music concerts which attracts, through original repertoires and astonishing initiatives, large audiences of classical music lovers.
Through the quality and diversity of performances the Festival actively contributes to the promotion of young musicians who perform particularly during the Périgord Noir Academy of Ancient Music, in August, and during the Week of Organ Music in Sarlat. Concert- goers can thus discover and appreciate the talent of young musicians in very convivial musical settings. Each season is designed around a central theme (“The voice of angels” in 2013, “Oriental Dreams” in 2014), with about forty concerts, both inside and in the open air, which are proposed in about twenty different venues and bring together the stars of chamber music, winners of international competitions, and also big names from the world of jazz.
During the three weeks of the Festival very wide audiences are present at the workshops and master classes, which are open to both adults and children, with the stress being on young people. Well-known and promising young musicians from the worlds of Baroque, classical music, as well as jazz, perform in exceptional places belonging to our national heritage.
In fact the Festival is associated with a region that is famous for its national heritage and the concert venues all bear witness to this fact: Romanesque churches, historical parks and gardens, abbeys, chapels, medieval towns and villages. All of these are situated near the medieval town of Sarlat and the famous prehistoric Lascaux caves, on the top of UNESCO’s list of places belonging to world heritage.

The French State, the Aquitaine Region and the “department” of Dordogne are all partners of the Festival.